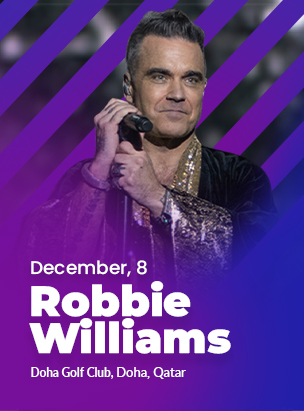 AGE LIMIT 21+
World Stage provides experience like no other – Superstars performing with Doha’s skyline as the backdrop, bringing together diversity of nations and languages on equal footing – all world united to spend 6 unbelievable nights full of energy and music in amazing Qatar.
There has been over twenty - five years since Robbie Williams tumbled out of the boy band Take That into a solo career.
Since then he sold over 85 million albums around the world; thirteen UK number one albums (the most for any solo artist, equalled only by Elvis Presley); fourteen number one singles; the most concert tickets sold in a day (1.6 million on November 19, 2005); the record - breaking three nights at Knebworth to 375,000 people in 2003; the para llel grand successes of his swing albums and of a reconvened Take That; an unprecedented and unmatched 18 Brit awards; the Christmas album, the X - Factor judging, the Royal Shakespeare Company musical The Boy In The Dress, Soccer Aid, numerous collaboration s in music, art, radio, books, fashion, TV and film . But that’s only a small part of the whole wild journey .
Brought to you by Qatar Airways and Qatar Tourism.
Sponsored by Ooredoo, Coca-Cola, Qatar Duty Free.
Organised by Alchemy Project.