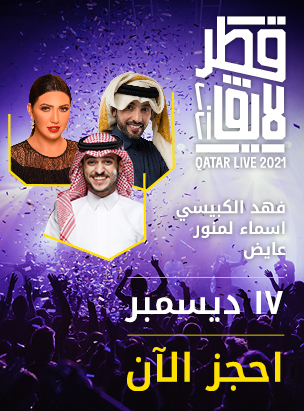 Qatar Live brings some of the Top artists from the Arab world to perform right here in Qatar! Experience spectacular musical nights, hear your favourite songs, and let the artists light up the stage of Qatar Live.
Fahad Al Kubaisi
Qatari born singer/ record producer best known for his "tender" baritone style and famous for producing a sophisticated genre of Khaliji music. Signed to Rotana Records, Fahad is the first Qatari to be nominated for a Grammy in 2018. He released his first album Jamaal El Rouh (The Beauty of the Soul), in 2001 and has since produced several successful albums.
Asma Lmnawar
Born in Casablanca, Morocco, and cited in Forbes as one of the “Top 100 Arab Celebrities” Asma Lmnawar is an Arabic singer, who burst onto the music scene in 1995. Asma has toured across Europe as well as the Middle East accumulating a fan base of over 13 million.
Ayed
In 2016, Ayed debuted his self-titled album, which produced three singles and won several first-place awards across the Middle East. The track "Fman Allah" from the same album occupied the No#1 spot for several weeks and was regarded as the highest viewed single across Arab Gulf countries.
Doors times for all shows – 6:30pm doors – Show Starts – 8pm – show ends midnight
read more
Add event to iCal
head there!
Points of sale