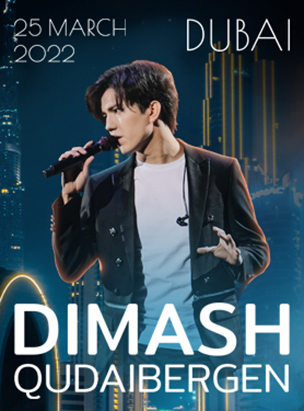 On 25 March 2022, Dimash Qudaibergen will perform live in Dubai at Coca-Cola Arena, Being the first concert since the pandemic for both Dimash and his fans, this show will become an incredible long-awaited celebration of music.

Dimash Qudaibergen is a famous Kazakh singer and songwriter holding such titles, among others, as Honored Artist of the Republic of Kazakhstan, Best International Artist according to MTV Global Chinese Music Awards, Best Asian Singer in Top China's Music Awards.

Dimash is a winner of an impressive number of professional contests, including a number of international contests. His most significant achievements include Grand Prix at the Slavyansky Bazar in Vitebsk, Belarus) as well as first runner-up in Hunan TV’s Singer-2017 held in China. The exposure and success in Singer became a turning point for Dimash, bringing him overnight stardom in China after airing of Episode 1 and giving his global career a start.

Fans from all over the world came to see him perform live at all these locations. Dimash's solo concert in New York performed as part of the ARNAU world tour was attended by fans from over 50 countries across all continents. His most recent live show in his home country in 2019 sold 30,000 seats of which at least 13K were taken by fans from over 60 countries.


*Proof of Vaccination is Not Required

Important Information:
• All patrons (including children and babies) visiting Coca-Cola Arena require a valid show ticket to enter the Arena, regardless of their age. In addition, children under the age of 14 years will require to be supervised throughout by a ticket-holding adult.
• Children under 14 years old require a valid show ticket to enter the Arena and must be accompanied by an adult ticketholder, but will not be allowed on the standing floor area.
• Children under 16 are not permitted in the General Admission standing floor area and must purchase a seated ticket.
For your safety, wearing a face mask is mandatory at all times.
Please do not attend if you have any COVID-19 symptoms.
read more
Add event to iCal
head there!
Points of sale