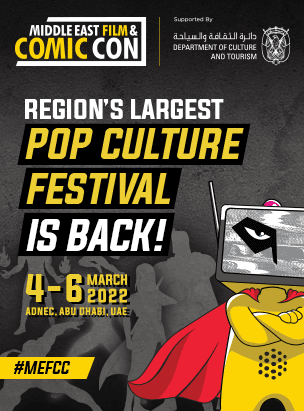 Geek Your Heart Out at MEFCC, the Middle East Film & Comic Con in Abu Dhabi, UAE!


Comic Con 2022 the UAE, is set to be one of the biggest so far, with A-listers like Nathalie Emmanuel making an appearance, and a chance to meet your favorite superheroes. Plus, you’ll get to cosplay, attend awesome workshops, enjoy live performances, and much more. The 2022 Middle East Film & Comic Con in Abu Dhabi, is filled with action that you don’t want to miss!

Grab Your Cape for a Fun Weekend with Family & Friends

From millennials to Gen Zs, MEFCC is a household event that everyone from the alphabet soup of generations eagerly awaits. Also featuring an outdoor festival arena with food trucks and the main stage, the Middle East Film & Comic Con UAE is an exciting festival for families and friends to meet their favourite celebrities & artists, indulge in the gaming zone, join cosplay parades, watch entertainment acts from Anime bands to alternative rock groups, and everything in between!

Vibe with Your Favourite A-listers

Nathalie Emmanuel, known for her roles in HBO fantasy series Game of Thrones and in the Fast & Furious film Furious 7, is the first of a host of international A-listers from the silver screen and streaming services including Netflix that will gather for a VIP meet and greets, insightful talks, interviews, and other thrilling event activations at Comic Con Abu Dhabi 2022.
Previous editions of the MEFCC have seen the likes of Jason Momoa, Zachary Levi, Benedict Wong, Nikolaj Coster-Waldau, Ezra Miller, Iwan Rheon, Tara Strong, Seth Green, Gillian Anderson, and William Shatner flown in for the event, and Comic Con 2022 is set to be the best yet with more announcements in the pipeline.

You don’t want to miss the Abu Dhabi Comic Con 2022 workshops, especially if your dream career is in comics and storytelling. Learn everything from first-time cosplay tips to how to create comic characters and pitch your comic book. There are plenty of informative workshops that you can sign up for at MEFCC 2022. The workshops are on a first-come-first serve basis, so make sure you sign up ASAP on the MEFCC website.

Get ready for magical entertainment at the Middle East Film and Comic Con 2022 in the UAE. From cosplay contests to live music with famous DJs, you won’t run out of things to enjoy.

Shop for Iconic Collectibles at the Marvel Booth

Marvel fans, you’ll love this. The 2022 Comic Con in the UAE will feature a personalized Marvel booth that will include your favorite MCU merchandise. You don’t want to miss it!


Enjoy fascinating artwork from some of the region’s biggest artists with a chance to meet them in person.

Watch Screenings at the MEFCC Theatre

Indulge in a unique cinematic experience at the MEFCC theater, with exclusive screenings of fan-favorite anime and films. Plus, you’ll enjoy plenty of interactive sessions.

Get Your Game on With GamesCon

Kickstart the action at the Gaming Zone, powered by GamesCon. Try out the latest software and play recently released games alone or in tournaments. The Comic Con Abu Dhabi 2022 will be a gamer’s paradise!


MEFCC 2022 will be organized in accordance with Informa’s AllSecure health and safety standards. As the world’s leading event organizer, Informa has developed a detailed set of precautionary measures to provide the highest levels of hygiene and safety. These measures include the guidelines approved by Abu Dhabi Executive Office such as mandatory face masks and social distancing.

Standard Entry Pass Includes Access To:
• MEFCC Theatre - Catch exclusive trailers, celebrity and industry panels, screenings and Q&As
• Gaming Zone Powered by GamesCon – Play in tournaments and test out the latest software and games
• Mainstage – Watch live music, cosplay contest, DJ sets, and a variety of geek-themed entertainment
• Artist Alley – Get personalized commissions from a selection of world-famous international artists, as well as over 200 regional artists
• Workshops – From cosplay tutorials to sessions in art, creativity, and animation you can learn from the industry experts
• Exhibition Hall – Shop from several brands and retailers, showcasing the latest merchandise, limited edition and exclusive collectibles, and larger-than-life activations and experiences